Home / Featured / You have positively affected my administration, President Buhari tells Osinbajo at 63

You have positively affected my administration, President Buhari tells Osinbajo at 63 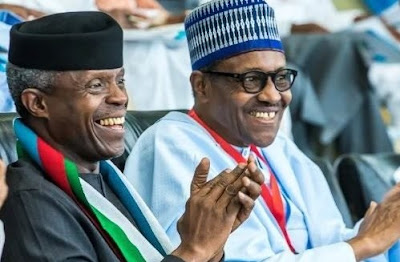 President Muhammadu Buhari has acknowledged the positive impact of his deputy, Professor Yemi Osinbajo (SAN), on the general performance of his administration.

The President, during a call made to the Vice President on Sunday to celebrate with him on his 63rd birthday, observed that he (Professor Osinbajo) had planted huge imprints on the administration’s economic and social intervention programme.

According to a statement issued by the Senior Special Assistant to the President on Media and Publicity, Mallam Garba Shehu, President Buhari commended the Vice President for his loyalty and dedication to the administration.

“In a telephone call Sunday afternoon to his deputy, the President commends Prof. Osinbajo’s loyalty and dedication to the administration.

“President Buhari notes that the intellectual capacity of the Vice-President has impacted positively on the overall accomplishments of Federal Government, most notably, in the economic and social intervention programmes.

“He also prays Almighty God to endow the Vice-President with greater wisdom and long life to continue to serve the nation and humanity,” the statement said.

Share
Previous Pastor Odumeje PHYSICALLY fights out a demon during a deliverance session in his church (video)
Next Nigerian tests positive to Coronavirus in U.S