Vogue model fighting for life after ‘falling near-n.a.k.e.d from window of third-floor flat’ 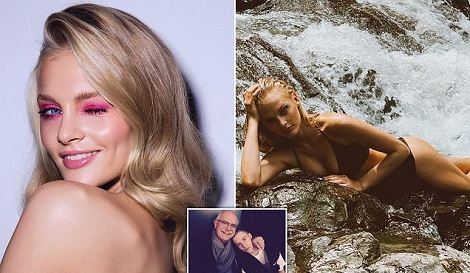 A model is fighting for her life today after reportedly falling almost n.a.k.e.d from a window. It is understood Ksenia Puntus, 21, plunged from her boyfriend’s third-floor flat in Moscow, Russia .

She was reportedly found in bushes by a street cleaner in temperatures of -5C “some hours” after the fall.

The model, who has posed for Russian Vogue and Tatler, suffered head and chest injuries as well as broken ribs, legs and pelvis.

And police have opened a criminal investigation amid fears of foul play.
One friend and fellow model, Alesya Kafelnikova, said: “It is incredibly sad, we are praying for her.

“She remembers nothing except her name.”

The fall happened after a night out and Miss Kafelnikova, daughter of Russian tennis star Yevgeny Kafelnikov, denied her friend had taken drugs.

“Ksenia was not taking drugs, which means we and her family know that something wrong happened,” she said.

“But people who were at the party with her deny everything and insist they took her back home to her boyfriend.”

“She was at the party with a bunch of people I know.

“Most likely their parents will do all in their power to hide the truth.”

Miss Puntus wasn’t taken to hospital until the cleaner called for an ambulance. The model was reportedly undressed at the time on Saturday morning.

She remains in intensive care and has had two operations.

But her grief-stricken mother said Miss Puntas is in a “grave” condition.

Police say they’ve interviewed at least one witness but, as of yet, no arrests have been made.