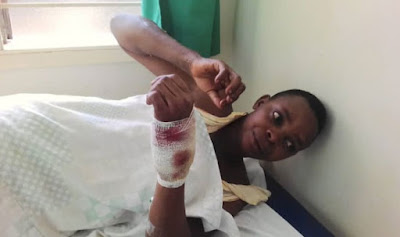 Authorities in Rubaga Division, Uganda are hunting a man accused of severely cutting his wife’s left hand with a machete for reportedly refusing to give him money for gambling.

The 47-year-old man from Musigula Zone in Rubaga Division nearly chopped off the hand of his wife Fiona Nyakato, 28, on January 5.

According to police, the incident occurred on Saturday at around 2am in one of the city night pubs.

It is reported that the suspect became furious after losing all the money he had on him to friends in a gambling game at the pub.

The accused person, who was reportedly drunk, later ordered his wife to surrender Shs100,000 which the family had received as rent payment for one of their rooms .

However, upon refusing to surrender the money, reasoning that it was all the family had been left with, a fight erupted between the couple with the suspect running for a panga which he used to harm his wife.

Having realised his mistake, the man decided to take his wife to Rubaga Hospital where he reportedly told the doctors that she had been attacked by suspected robbers who broke into their home.

Ms Nyakato’s condition worsened and she was referred to Mulago hospital. On learning that he was being followed by a group of villagers, the accused person went into hiding.

The chairman of Musigula village, Mr Francis Mawanda, said he had on several occasions warned the suspect against operating a bar during odd hours.

“The last time I confronted them I smelt marijuana and threatened to close his bar but other drunkards threatened to deal with me for trying to interfere in what they called their booming business,” Mr Mawanda said.

He said he received several complaints from the victim who accused her husband of selling family property to engage in gambling.

According to the victim, this is allegedly the third time the accused person is hacking a person.

Ms Nyakato alleged that her husband last year hacked two; one in Rukungiri and another in Kabusu, a Kampala suburb.

Due to his actions, residents in Musigula Zone have razed down the suspect’s pub.

The actor shared the throwback photo on his instagram page writing; “#tbt with Eddie Murphy“ …