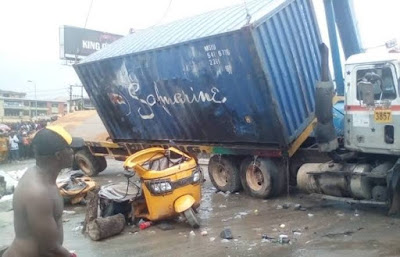 A middle aged man was on Friday crushed to death by a truck at Upper-Iweka, Onitsha.

The deceased was said to be walking beside the road when the truck knocked him into the drainage, leaving him dead.

According to an eyewitness, “The truck lost control after the MCC pedestrian bridge and fell into the adjoining gutter, killing the man.”

He said a total of three male adults where involved in the crash, with one death recorded.

He said, “At about 3.20pm today Thursday 6 March, 2020 a fatal Road Traffic Crash was recorded at Upper-Iweka by TRACAS park, Onitsha.

“The fatal crash which involved a Mark Truck with registration number DGE352XA was caused by Speed Limit Violation and Lose of Control.

“Officers and men of the FRSC have cordoned off the scene and controlling traffic, while awaiting the arrival of the heavy duty tow truck from Asaba to remove the obstruction caused.

“The Sector Commander Federal Road Safety Corps, Anambra State, CC Andrew A. Kumapayi, condole with the family of the deceased.

“He advises motorists to drive only within stipulated and common sense speed limits and shun all forms of dangerous driving, as such could only lead to avoidable road mishaps.”