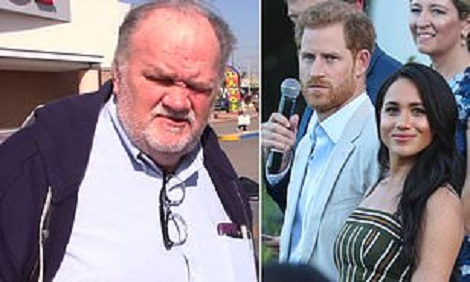 Thomas Markle has slammed his daughter Meghan as he claims she ‘dumped him’ before her wedding to Prince Harry and says the couple have ‘no right to speak to the Queen that way’ after the couple hit back over their Sussex Royal branding.

The 75-year-old was seen coming out of a shopping centre close to his house in Rosarito, Mexico and told reporters that he was ‘upset’ with his daughter and her husband Harry who married in 2018.

He claimed that the Sussexes didn’t have the right to use the word Royal as he launched a scathing attack on his daughter, who has relocated to Canada with Harry and their son Archie, who Mr Markle has not met.

Speaking on Monday he said: ‘I’m very upset with Meghan and Harry right now. I don’t think they have the right to use the word Royal.

‘I don’t think they have a right to speak to the Queen in the way they have spoken to her, I think it’s an insult to the Queen and to the British people.

After speaking to the press Mr Markle then struggled to get back into his car and seemed to be in pain as he sat in the drivers seat.