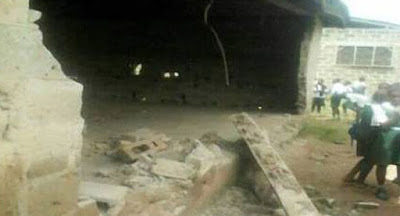 The partial building collapse is said to have happened at about noon on Friday, during school hours.

The deceased, 14-year-old JSS 3 student is the only victim of the incident, some of the blocks that fell from the building were said to have landed on her head.

An eyewitness who confirmed the collapse said the girl was taken to the Ondo State University of Medical Sciences Teaching Hospital in the town for medical attention.

A good Samaritan who lives in the neighborhood helped to rush the student to the hospital.

He told newsmen that the deceased breathed her last before getting to the hospital.

The men of the Nigeria Police Force have since arrived at the school premises, to prevent any crisis that may occur as a result of the unfortunate incident.

Spokesperson to the Ondo State Police Command, SP Femi Joseph confirmed the incident to Channels Television. He said the building that collapsed was one of the abandoned buildings in the school compound.

He expressed concern that the untimely death of the student would have been prevented if proper measures were put in place by the school’s management.