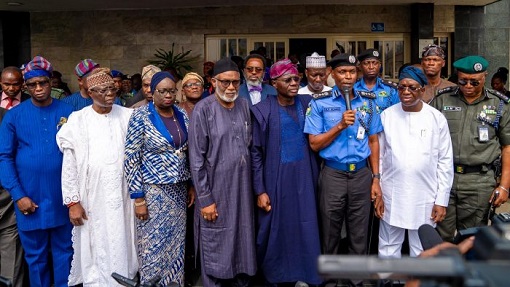 The Southwest Regional Security Operation, code-named, Operation Amotekun has finally been adopted by Governors of all states in the Southwest and the Inspector General of Police (IGP).

The Southwest Governors’ Forum told the Mohammed Adamu in Lagos on Thursday that, the development would spring up fresh efforts to secure local communities.

The Forum spoke through its chairman and Governor of Ondo State, Rotimi Akeredolu, SAN, at the Southwest Security Meeting on Community Policing convened at the instance of the IGP.

The meeting was held on Thursday at the Banquet Hall of the Lagos State Government in Alausa.

At the end of the meeting, which held for about two hours behind closed doors, the IGP and representatives of each State okayed the framework of Southwest Regional Security Network (otherwise known as Operation Amotekun), but initiative will not be run as a regional security operations, as initially suggested. It will be state-led effort, the IGP said.