Shi’ites vows to embark on Arbaeen trek despite ban 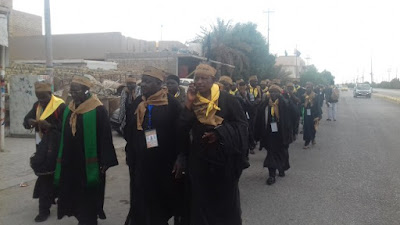 Members of the Islamic Movement in Nigeria, also known as the Shi’ites, on Thursday said despite police order banning their activities, they will embark on the annual Arbaeen symbolic trek on Saturday across the country.

According to the Shi’ites, the Arbaeen symbolic trek is part of their religious rights as enshrined in the Nigeria constitution which must be accorded respect by the government.

They said they were aware of government antagonism towards them but insisted they would join millions of others the world over to observe the Arbaeen trek which comes 40 days after the Ashura, to commemorate the martyrdom anniversary of Imam Husain, the grandson of Prophet Muhammad.

The Shi’ites Arbaeen trek last year ended up in gunfire.