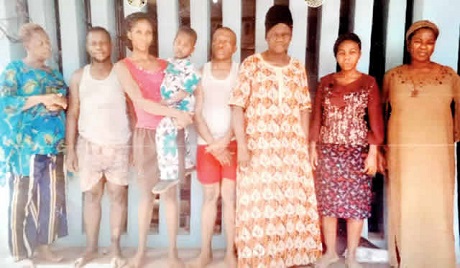 The police spokesman in the state, Orlando Ikeokwu, who confirmed the arrest on Tuesday in Owerri, the state capital, said that one 39-year-old Nkechi Iroegbu, led the operatives of the Anti-kidnapping Unit of the command to the hideout of the other members of the syndicate where they were arrested.

He said that the arrest of the suspects was part of the efforts and commitment of the command in dealing with issues of child trafficking in the state.

The PPRO said that the state commissioner of police, Olaniyi Fafowaro had charged all the tactical heads of the command to deal with issues relating to child stealing and trafficking in the state.

He said, “On January 12, the command received a report of a stolen child, one Godday Obi, 5 years old, at Umuejechi, Nekede, Owerri West LGA of Imo state.

“Acting on that report, the command’s Anti- kidnapping unit swung into action and upon credible information, arrested one Nkechi Iroegbu, 39, a native of Akoli Imenyi, Bende LGA, Abia state. She confessed to the crime”.

“They all confessed to their various roles and led the operatives to the recovery of the stolen child”, Ikeoku said.