Russian soldier rolls out tanks in romantic proposal to girlfriend 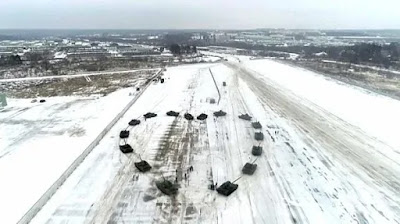 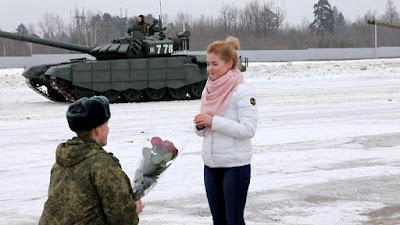 A Russian soldier has pulled out all the stops to propose to his girlfriend, with his fellow officers manoeuvring 16 tanks to surround the couple in a heart shape.

The high-octane romantic stunt was filmed in a video published by the defence ministry on Friday, Valentine’s Day.

As snow fell, the T-72B3 tanks rolled into position on the Alabino training ground outside Moscow.

Lieutenant Denis Kazantsev led his long-term partner Alexandra Kopytova into the centre as she held her hands over her eyes, the defence ministry’s TV channel Zvezda reported.

Kazantsev, a platoon commander, went down on bended knee, holding a bunch of red roses.

“We’ve been together a very long time. We’ve stood the test of time and distance. Marry me!” he said as his girlfriend nodded silently. He then put a ring on her finger.

The tanks used for the romantic manoeuvre also take part in the annual Victory Parade on Red Square, Zvezda reported.

“No one has ever seen such a large-scale proposal,” its reporter said.

Share
Previous Sanwo Olu to begin massive rehabilitation of St. Finbarr’s road, starting from UNILAG gate
Next Venezuelans too poor to have s.e.x as economic crisis leaves them unable to afford condoms or a hotel room