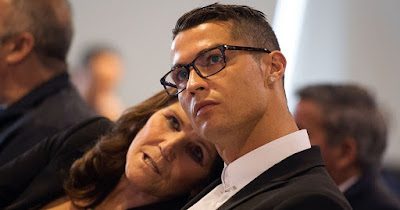 Cristiano Ronaldo has revealed he won’t let his mum watch him in big games any more. The world was treated to a unique insight into the life of former Manchester United and Real Madrid star Ronaldo when he sat down with Piers Morgan for one of the most revealing interviews of his career.

The Juventus star has played in plenty of huge occasions – after all, he has five Champions League crowns, five Ballon d’Or awards and countless league titles to his name.

He has also won the European Championships and the Nations League with Portugal.

But even though the player himself has shown again and again that he’s the man for a big game, Ronaldo’s mum gets too nervous watching him – so the 34-year-old has banned her.

Ronaldo told Morgan : “She gets so nervous, I don’t understand why.
“She is not allowed now to watch big games.

“I get friends to stay with her and she goes for walks around the house. She fainted two times in the stadium. She is nervous.

“It is impossible, I don’t have a father anymore and I don’t want to lose my mum, so I told her ‘you will not watch semi-finals or finals anymore’.”

Ronaldo became emotional during the interview when he talked about losing his dad .