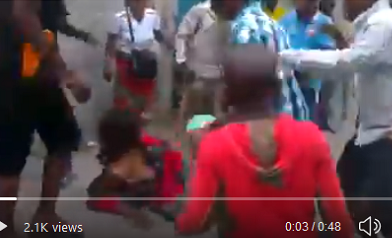 According to twitter user, Deolu Sunloye (@Deolu_01), she was recognized as the ex-governor’s girlfriend and was descended upon by angry youths.

”This woman was recognized in Owerri as Rocha’s girlfriend. As she was parking her exotic car assumed to have been gotten with IMO state money, she was given the beating of her life. People are indeed angry. Has the silent revolution began? Government better shape up, its coming”, he tweeted while sharing the video.