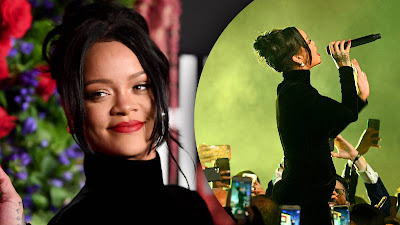 Rihanna has fuelled widespread speculation that she is pregnant. Fans went wild after the singer, 31, stated she was ‘going to give birth to a black woman’ during an interview at the Diamond Ball on Thursday night in New York City.

The star’s comments during a conversation on the excellence of black women prompted intense division on social media, with some congratulating her on the news, while others expressed their disappointment that they weren’t the ‘father of her unborn child.’

‘My mother is an incredible example of how to fight through obstacles in life. I’m sure her mom taught her that and that’s how I’m going to be. We are impeccable, we’re special, we’re special and the world is going to have to deal with that.’

And while Rihanna hasn’t confirmed any pregnancy news herself, it didn’t stop fans taking to Twitter with their theories:

‘B**** RIHANNA IS PREGNANT????? AND I AINT THE DADDY?????’
‘IF rihanna is pregnant… imagine crawling out the mf womb n finding out ur mom is literally RIHANNA???? omg… the excellence.’

‘Me after seeing the love of my life Rihanna is pregnant with another man’s child.’

‘I found out Rihanna is pregnant and I’ve cancelled my appearance at school today. IM TIRED OF BEING CHEATED ON.’

‘Rihanna is pregnant. This is a lot to take in right now.’

‘Can’t believe rihanna is pregnant omg imagine having her as your mom……a blessing.’

Share
Previous We will defeat Atiku, PDP at Supreme Court – Oshiomhole
Next Granny jumps into well after being raped by pastor