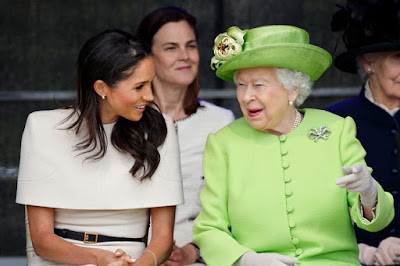 When the Royal Family sit down at Sandringham to exchange presents on Christmas Day they won’t be opening a nice new shirt or some cosy slippers.

Instead, the Queen, Prince Charles, Duke and Duchess of Cambridge, Prince Harry and the rest of the gang buy each other joke presents.

We imagine it’s quite a lot of pressure on new additions to the family – like Kate Middleton, Meghan Markle and Jack Brooksbank – to come up with a funny and creative idea for their in-laws.

But it seems the Duchess of Sussex hit the nail on the head when she attended her first Royal Christmas back in 2017, five months before she married Prince Harry.

She reportedly bought her future grandmother-in-law a singing toy hamster – and it went down a treat.

The Daily Star reports that her Maj was so happy with the present that she burst out laughing, before remarking: “It can keep my dogs company.”

A source said: “Meghan bought a little hamster that sings with a little rope for Her Majesty.

“It was so funny, especially when the corgis tried to take hold of the toy.”

However it turns out the corgis weren’t quite so impressed – and ended up mauling it to pieces before the festive celebrations were over.

One Jessica Obinomeh and her mother, Sandra, have drawn a battle line at an Ogba …