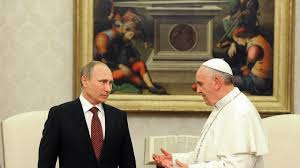 Russian President Vladimir Putin will meet Pope Francis next month, the Vatican said on Thursday, an encounter that could help pave the way for an historic papal trip to Russia.

The Vatican said Putin, who will be on a state visit to Italy, will hold talks with the Argentinian-born pope on July 4.

The meeting, their third since Francis was elected in 2013, comes at a time of improving relations between the Vatican and the world’s Orthodox Churches.

It also will be their first since Francis and Russian Orthodox Patriarch Kirill met in 2016, a landmark step in healing the 1,000-year-old rift between the Western and Eastern branches of Christianity.

Share
Previous Gov. Ugwuanyi issues Proclamation for 7th Assembly’s inauguration on June 10
Next Oh dear! Today on what I ordered vs what was delivered