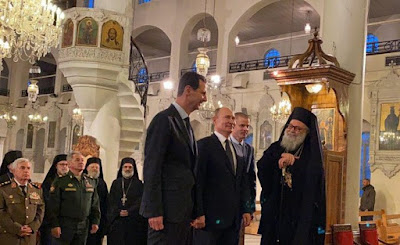 A video has emerged where in a lighthearted exchange last week, Russian President Vladimir Putin suggested to Syrian President Bashar Assad that he invite US President Donald Trump to visit Damascus ‘to become normal’.

Assad signalled he was prepared to go ahead with the idea. Putin said he would pass the message to Trump.

The video, according to multiple reports was shot during Putin’s visit last week to Syria.

It was aired Sunday by the Russian-1 channel and it showed a conversation between Putin and Assad as they visited the Orthodox Church of the Virgin Mary in Damascus.
Assad mentioned the New Testament story of Paul the Apostle, who became a Christian after experiencing a miracle as he traveled to Damascus where he planned to arrest disciples of Jesus.

According to Christian lore, the incident happened on the road where the church is located.

“If Trump arrives along this road, everything will become normal with him too,” Assad jokes to a smiling Putin, according to a translation by the Axios website.

Putin responds that Trump would be keen to visit and if he wasn’t, he’d convince the American leader to come.

According to the original Axios transalation, Putin agreed with Assad that Trump needs some healing in Damascus. He laughed and told Assad: “It will be repaired … invite him. He will come.” Assad answers that he is ready to invite Trump, to which Putin responds, smiling: “I will tell him.”