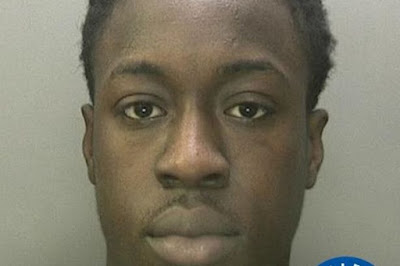 A promising footballer who r.a.p.e.d a woman he met outside a bar was caught after his brave victim recorded the ordeal on her phone.

The recording lasted for 20 minutes during which the victim was heard saying “you are r.a.p.i.n.g me”.

Assane Koite who had previously admitted rape, was sentenced to six years and one month.

On the evening of February 5, 2018 the woman had been out with friends in Birmingham city centre and visited a number of bars.

She parted company with them and joined another group but when she tried to get in Missing Bar she was refused entry for being too drunk at about 1.30am.

CCTV captured her wandering around the Arcadian Centre before she “encountered” the defendant and another man.

Shortly after they got into a taxi which went back to a flat rented by Koite.

Nigel Stelling, prosecuting at Birmingham Crown Court, said that the woman initially had some s.e.x.u.a.l “contact” with the other man.

He said she was then with Koite and recorded her encounter for 20 minutes.

“Throughout that period of time she was trying to persuade the defendant to desist. She attempted to employ diversionary tactics, claiming she wanted to smoke a cigarette and go to the lavatory.

“On more than one occasion she asked the defendant to order her a taxi. He was not dissuaded by any of that.

“She says to him ‘You are raping me. I did not say you could do that’.”

Mr Stelling added that there was some discussion afterwards about her phone before she eventually got out of the property and then phoned the police.

Koite, 22, of no fixed address, who was arrested later, claimed to officers that the sex was consensual.

In passing sentence, Judge Mark Wall QC said: “The victim in the case was out with friends and had a number of drinks. She became separated from her friends and had the misfortune to meet you and your friend.

“Despite the fact that that she recorded all of the events on her phone you continued to rape her for something like 20 minutes.

“It was obvious to you she was under the influence of alcohol and you took advantage of that.”

Martin Butterworth, defending, said Koite had had trials with Aston Villa and Birmingham.

“He played semi professional football and signed for Tamworth. His future at the age of 16 was very promising,” he said.

However he said the defendant broke his ankle badly which brought an end to his footballing career and he turned to drugs.

He said there was no question of Koite hiding the phone from the woman.