Prince Harry will not fly back to join Meghan in Canada 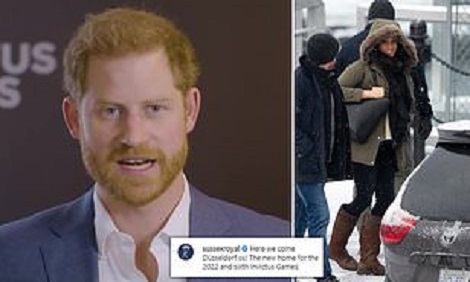 Prince Harry will not be flying back to join Meghan and Archie in Canada yet as he continues to thrash out the details of the ‘Megxit’ deal which confirmed the Sussexes would be stepping down as senior royals.

Harry broke cover for the first time tonight in a video on the ‘Sussex Royal’ Instagram page to reveal the power his Invictus Games had to ‘heal families’ after the Queen announced the split in the Royal Family on Monday.

The Duke of Sussex posted today’s video to announce that the ‘story continues’ with Dusseldorf in Germany hosting his charity sports competition for wounded veterans in 2022.

Harry’s appearance follows the first sighting of Meghan since the crisis talks at Sandringham. The Duchess, who was absent from the meeting, was seen smiling as she boarded a sea plane on Vancouver Island in Canada yesterday.

The Queen had revealed in a deeply personal statement that she had agreed for Harry and Meghan to begin a ‘new life’ as an ‘independent’ family, a move which Meghan is understood to have pushed for just 20 months after their wedding.

Prince Harry is expected to remain in the UK into early next week to hammer out the details of this unprecedented arrangement before heading back to join Meghan and Archie in Canada where they have been staying at the £10.7 million mansion where the family spent Christmas.

Share
Previous US and China sign deal to ease trade war
Next I want him back, 31-year-old woman stabbed in private parts by husband says