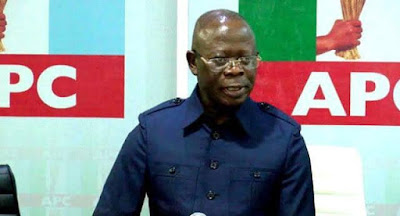 Amidst rebellion by some members against the leadership of Comrade Adams Oshiomhole, an emergency National Executive Committee (NEC) meeting of the ruling All Progressives Congress (APC) has been scheduled to hold in Abuja on Tuesday, March 17 at 3pm.

The organ of the party last met in November 2019 and skirted the demand by some members of the NEC to suspend Oshiomhole then as chairman, over his alleged dictatorial tendencies and paralysing the party’s organs. The rebels had also blamed Oshiomhole for the party’s losses in Zamfara, Rivers, Bauchi and others.

Venue for the new meeting is the National Executive Committee Hall at the party’s national secretariat in Abuja, now under cordon by the police and the DSS, following the crisis over Oshiomhole’s chairmanship.

A sign of crisis in the party was that the meeting notice was signed by acting National Secretary, Chief Victor T. Giadom and not Architect Waziri Bulama who was named on Wednesday as substantive replacement for Mai Mala Buni, who had moved on to become governor of Yobe State.

Giadom invited all NEC members to attend the emergency meeting in line with Article 25 (B) (II) of the Constitution of the Party.

The call came hours after the APC Progressive Governors Forum also called for an emergency meeting of the NEC.