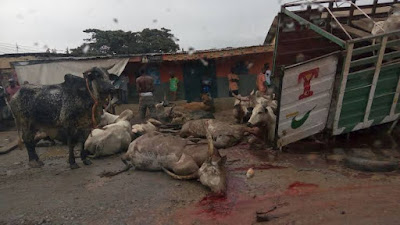 In a similar development, a female, adult has been killed after a fence collapsed on her within an Abattoir complex in the Agege area of Lagos state, and her remains were moved to the Nigeria Police (Abattoir Division).

The partially collapsed fence at Abattoir complex in Oko-Oba was alleged to be responsible for the death of the female victim and injuries sustained by four others who were said to be at a proximal distance to her along same fence.

Confirming the incident to The Nation, Nosa Okunbor, spokesperson of the Lagos State Emergency Management Agency (LASEMA) said, “a fence collapsed within the Abattoir leading to the loss of life of an adult female, while four other victims who sustained minor injuries. Investigation conducted revealed illegal shanties built behind the fence led to the incident.”

He also added that a LASEMA rescue team was involved in an operation where the ‘Live’ cable of an electrical wire cut and fell on a truck in a motor stand, thereby igniting it and four others at Mile 2 Inward Berger Suya area of the state.

“On arrival at the scene of the above incident, it was discovered that an unidentified company that sells Trucks was gutted by fire and had four of its truck razed by the Inferno with one partially razed. The course of the inferno was attributed to an Electrical life wire cable that fell on one of the trucks. No life was lost and injuries were not sustained,” he said.

Further investigation revealed that the accident was as a result of mechanical fault (brake failure) led to the truck rolling back while ascending the hilly part of the road and subsequently fell into a ditch thereby obstructing 90 percent of the road in the process,”Okunbor said.