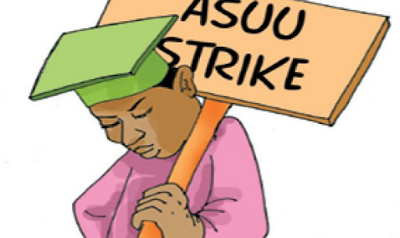 The Federal Government has directed the vice-chancellors of public universities and inter-varsity centres to enforce no-work-no-pay rule on the lecturers who are on strike.

The memo, which was signed by the Director, Research, Information and Technology, Dr S. B Ramon-Yusuf, stated that payment of salaries from any other sources would be viewed as violation of extant rules and government’s directive.

It partly read, “In view of the current Industrial action by the Academic Staff Union of Universities, the Federal Government has directed that there shall be no payment of any form of salaries and allowances to the staff on strike in federal and inter-varsity centres.

“Consequently, I am to direct vice-chancellors to apply the “No-work-no-pay” rule. However, universities and inter-varsity centres are to pay salaries and allowances to non-teaching staff. All Vice-Chancellors and Directors of Centers should note that the salaries to staff on strike from whatever source of funds shall be viewed as violation of extant rules and directive of the Federal Government of Nigeria.”

Reacting to the memo, Chairman of the University of Ibadan chapter of ASUU, Dr. Deji Omole, said it was shameful for the Federal Government to owe lecturers seven years of unpaid salaries and allowances and still want them to continue to work while the Presidency and the National Assembly members feed fat on the wealth of the nation.

He said a government that prides itself as having integrity should honour agreements reached with the union instead of resulting to harassment and intimidation of union members on a patriotic struggle to save public education in the country.

Omole noted that the directive would fuel the struggle, adding that the union members had resolved to get proper education for the children of average Nigerians.

He said military government tried unsuccessfully to intimidate the collective will of Nigerian masses, adding that members of the union had resolved to fight for the future of the country.