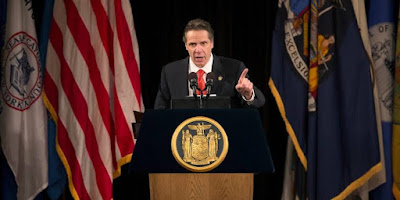 A US cruise ship hit by coronavirus was given permission late Saturday to dock, while New York announced a state of emergency as confirmed cases across the country surged past 400.

The fast-spreading virus has already spread to 30 US states, killing at least 19 people, while the American capital announced its first case on Saturday and citizens were coming to terms with public events being canceled across the country.

The Grand Princess cruise ship has recorded 21 COVID-19 infections on board — 19 crew and two American passengers — out of 45 people tested.

Authorities ordered the vessel to remain at sea off the coast of San Francisco, where it was due to dock Saturday following a 14-day trip to Hawaii, after it emerged that a passenger on a previous voyage had contracted the virus and later died.

The vessel will instead go to nearby Oakland on Monday and begin disembarking passengers in need of “acute medical treatment,” vessel owner Princess Cruises said in a statement.

The ship’s crew will be quarantined and treated aboard the ship, the company added.

Around half of the vessel’s 1,100 crew hail from the Philippines and several are among those diagnosed with the virus, according to Princes Cruises.

Vice President Mike Pence, who is managing the US government’s response to the COVID-19 outbreak, said earlier that all 3,533 passengers and crew would be tested for coronavirus and quarantined if necessary.

Further south in Los Angeles, passengers aboard another cruise ship were told they must remain on the vessel overnight.

The order came after a woman was taken off the Carnival Panorama cruise ship to be tested for the virus, the Long Beach Post reported.

Here are photos showing how Lagosians took to gbagada expressway to keep fit this morning. …

Usher takes a ride with his girlfriend amid COVID-19 lockdown

On Sunday, Usher was seen getting some fresh air in LA’s Los Feliz neighborhood with …