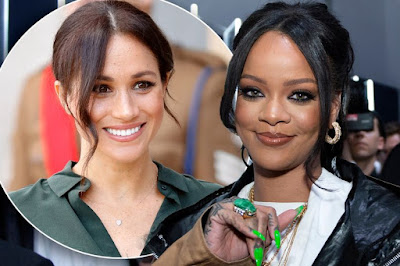 Meghan Markle could be friends with anyone in the world thanks to her position as a member of the Royal Family, so it’s no surprise that she’s said to have buddied up with the woman everyone wants to be friends with – Rihanna.

According to reports, the Duchess of Sussex and the popstar became BFFs after Rihanna, 31, moved to London.

The pair are said to have known each other before Meg, 37, became royal, but bonded after her fame sky-rocketed following her marriage to Prince Harry , 34.

An insider told Radar Online: “They actually have a lot in common in terms of style and a shared need for total privacy in their lives.

“They’ve bumped into each other a few times before Meghan was super famous and have a few mutual acquaintances on the Hollywood social scene who’ve put them in touch again recently.”

While new mum Meghan is spending all her time with baby Archie, she’s reportedly hoping to spend more time with her new pal once her maternity leave comes to an end.

Share
Previous Queen and Prince Philip’s 1st home is on sale for £5m
Next Photo: Reno Omokri poses with his twin sons