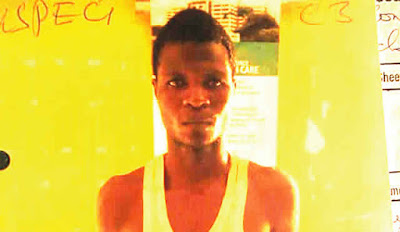 The Niger State Police Command has apprehended one Ishaya David, 29, for allegedly killing his wife.

Ishaya was arrested by police detectives attached to the Gawu Babangida Division in the Gurara Local Government Area of the state.

The suspect, who hails from Sabon Kaida village in Gurara, was said to have killed his wife, Rifkatu David, 25, over allegations of promiscuity.

It was learnt that the suspect stabbed his wife to death for having an affair with her ex-boyfriend.

Northern City News gathered that the suspect had earlier cautioned his late wife to desist from relating with her ex-boyfriend, but she reportedly ignored the warning.

Narrating what led to the killing of Rifkatu on Thursday, Ishaya said, “I used a knife to kill her for her refusal to adhere to my instruction. I told her to desist from sleeping with men, but she boasted that nothing would happen, so, I lost my temper and stabbed her.”

The suspect further described the deceased as an unfaithful woman, who had no respect for her husband.

“My wife was stubborn; she never listened to me; I even sat her down and told her the implications of what she was doing, but she did not repent and she had to pay the supreme price,” he added.

The Command Public Relations Officer, Muhammad Abubakar, confirmed the incident, stating that the matter had been charged to court.

Share
Previous I Am Fully With APC, Omisore Declares
Next Man Stabs Wife To Death Over Extramarital Affairs