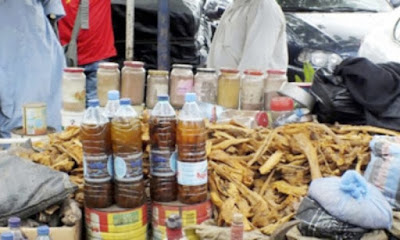 The Osun State Police Command on Monday said it had commenced investigations into the circumstances surrounding the death of one Mutiu Adekunle, who died after drinking a herbal mixture.

Adekunle’s death occurred on Sunday around 11.15pm at a hospital where he was rushed to, having developed complications after drinking a herbal mixture given to him by one Alfa Nureni Suleiman.

Findings by Punch correspondent revealed that the deceased and one Opeyemi Olayiwola were given the herbal mixture by Suleiman.
However, after drinking the said mixture, both men developed complications and were rushed to a private hospital in the Ijetu area of Osogbo.

While Olayiwola was said to be responding to treatment, Adekunle gave up the ghost at the hospital.

The Osun State Commissioner of Police, Johnson Kokumo, who confirmed the death, explained that the prime suspect had been arrested.

He said, “The matter was reported at the Oja Oba Police Division (Osogbo) on Sunday at about 11.15pm. It was reported that one Olayiwola Opeyemi and Mutiu Adekunle were given a herbal mixture to drink by one Alfa Nureni Suleiman.

“As a result, the duo developed complications and were admitted at a private hospital in the Ijetu area of Osogbo.

“Mutiu (Adekunle) later gave up the ghost in the same hospital but Olayiwola is responding to treatment. Our operatives have visited the scene.

“The suspect has been arrested for interrogation. The corpse has been deposited at the LAUTECH Teaching Hospital’s morgue for autopsy.”

The CP, who spoke through the command’s spokesperson, Folasade Odoro, said the police would carry our diligent investigations into the cause of death.