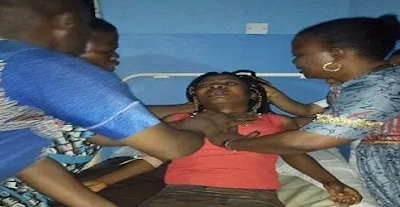 A lady, Miss Ogochukwu Igwe, has  been allegedly beaten to coma by her landlord, identified as Obidike in Umudim Nnewi, Nnewi North Local Government Area of Anambra State.

The victim, a hairdresser, was reportedly beaten up by the suspect, together with his son for asking them to stop using their vehicles to block her salon shop.

It was gathered that trouble ensued when the landlord, on arrival to his house, parked his car in front of the salon, which resulted into a brawl.

Speaking to newsmen on her hospital bed at Glory hospital and Maternity, the victim alleged that the landlord strangled her after hitting her with the drier in her salon.

She said, “I pleaded with him to shift the car from blocking my shop but instead of yielding, the landlord told me to pack out of the shop and that he would deal with me when his son returned in the evening.

“The son later arrived with his tipper, came with his father into my salon and used the drier in my salon to hit me.

“He held me by the neck and tried to strangled me and I fell down unconscious. The next place I saw myself was at Glory hospital and Maternity,  Umudim Nnewi.”

Ogochukwu said it was after she recovered that she saw a female police officer who introduced herself as Inspector Nneka, the investigating police officer (IPO), from Central Police Station, Nnewi.

“She took my statement and told me that Onyeka who beat and tried to strangled me has been arrested but that they were yet to arrest his father.

“I later learnt that he was granted bail while his father has not been arrested,” she added.

She appealed to the state commissioner of police, Mr John Abang, to come to her aid by ensuring that the suspects face the wrath of the law.

The counsel to the victim, Mr Kanayo C. Muoneke, in a petition to the state Commissioner of Police, CP, Mr John Abang made available to newsmen, urged the CP to intervene, adding  that the victim had almost passed away if not for divine interventiom.

“Presently, the victim can’t conviniently eat because of the injuries sustained and the suspects are celebrating the victim’s fate,” he said.

Six-week-old newborn dies of coronavirus in US

Thai king locks self in isolation with 20 women

Chinese city BANS the eating of dogs and cats

The Lagos State COVID-19 Taskforce, mandated by the State Government to monitor and enforce compliance …

Diamond Platnumz’s manager says he has recovered from covid-19