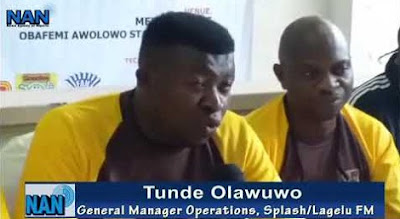 No less than 180 schools in the southwestern part of the country have signed up to participate in the third edition of the Lagelu FM Inter-High School relay race scheduled to be held in Ibadan.

The competition is being organized by Lagelu FM, a sister station of Splash FM, co-owned by West Midland Communications.

The event, which began in 2017, had discovered many talents representing its various states nationwide. People watch and play online, the race game.

Olajuwon said: “The competition is a grassroots race essentially to discover and help nurture future athletic stars of the state of Oyo mainly and, of course, neighboring states.

“We are pleased to inform you that, even as we speak, 180 schools have officially registered. We are very excited about this because it keeps growing.

“The first year, about 60 schools were registered. The second-year that was last year, we had about 120 schools. So this year, we have registered about 180 schools is a sign of progress and enrollment is still ongoing. “

He praised the Government of the State of Oyo for being the main sponsor of the tournament and said that the acting governor, Seyi Makinde, had identified since the beginning of the race with his progress.

Olawuwo also praised other partners in organizing the event, including the Federal Ministry of Youth and Sports, the Kayrom Lee gym and gymnasium and Sumal foods, among others.

Mr. Olufemi Ajao, Southwest Zonal Coordinator of the Federal Ministry of Youth and Sports, said his office had entered the event from the start, congratulating the organizers for their achievements so far.

“If you look at the National Youth Games that just finished in Ilorin a few weeks ago, Oyo State has not received any athletics medal in a long time.

“But only this year, perhaps due to the talents they chose from our relay, did we have athletic medals. So, that is one of the achievements achieved so far.

“So far so good, we have been enjoying the relief dividends of that school. At least the state of Oyo and some neighboring states have come to pick up athletes.

“I don’t think in Nigeria today, we have any athletic event that has benefits for athletes, even for coaches, like Lagelu Relay,” he said.

Ajao described the initiative as the only way to boost sports development in Nigeria, adding that aging athletes should be replaced.

Also speaking, Emb. Romoke Ayinde, the Executive Director, Kayrom Lee Gym and Fitness Center, said there had been a great improvement in the initiative.

“If you look very well, this is the third edition, you can vividly see that there is a great improvement.

“I must confess, it is one of those things that motivated me to come to the Racban Academy,” he said.
She said that some talents discovered in the career needed someone to develop and nurture them, and added that most of them do not know the talent they have.

Ayinde asked other interested parties to support the initiative to improve efforts in developing and raising young talents to stardom.

The event would be held at the Sports Complex of the University of Ibadan from October 17 to 19.