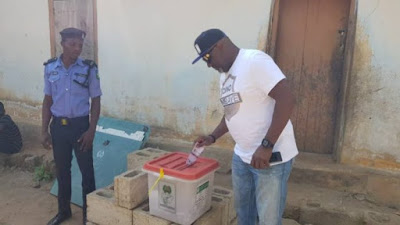 With other results yet to be collated, the PDP candidate, Senator Dino Melaye has raised the red flag again, alleging alteration of results.

In a tweet, he commended the voters in the district for voting for him, against the APC rival, Smart Adeyemi. At the same time, he claimed magic results were emerging.

After sorting and counting in each affected polling unit, the results will be taken to the Local Government for further addition. They will thereafter be transferred to Lokoja for final collation and announcement.

Voting was peaceful in Lokoja and other areas of the Senatorial District including Odolu in Kabba, Aiyetoro-Gbedde and Demonstration Primary School, Asuta Ward, voting unit of PDP National Publicity Secretary, Kola Ologbondiyan.

At the Ward B Unit 001, Karaworo, near Pararanda, in Lokoja, accreditation began as early as 8am, after which voting commenced.

While early hours voters’ turnout was impressive, however there was voter apathy, as most polling units witnessed no voters three hours before the 2pm closing of voting.