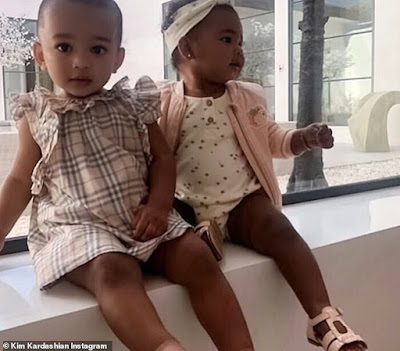 Kim and Khloe Kardashian had daughters at about the same time – Chicago was born on January 15, 2018 and True was welcomed on April 12, 2018  and that has turned out to be a very good thing.

Chicago has found a best friend in her cousin. On Friday the little girls were seen getting along well as they had a play date together.

Chicago had her hair pulled back showing her earrings.

She was dressed in a sleeveless Burberry dress with ruffles around the neck that costs approximately $200. True had on a polka dot onesie with a matching headband and a pink zip-up jacket.

She also had on white sandals that showed off her little toes.

The children were sitting on a ledge by a window that revealed a cherry blossom tree and pebbles outside.

At one point both girls looked out the window with True sweetly putting her arm around her cousin.

It was likely Khloe’s Calabasas, California mansion. Kim shared the images and did not leave a caption but did add a double heart emoji.