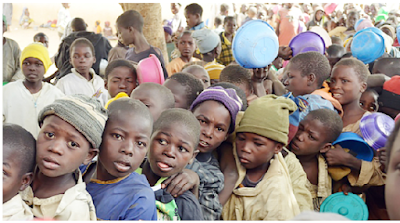 The Kano State government has started ridding its streets of Almajiri as it begins to put into effect its recent ban on begging in the state.

About 1500 of such young beggars have been taken off the streets, although some of them were rounded up a few months back.

Those from outside the state have been sent back to their states origin.

In a similar move to discourage street begging ,the Kebbi State government plans to involve 504 Quranic schools in the state in a World Bank assisted integrated programme to give the children proper education and care.

Government has earmarked N70 per meal for the children and N500,000 grant to each of the pilot Quranic schools.

The House of Representatives also plans to initiate reforms of the Almajiri system of education in the country.

A member of the House, Dr Balarabe Kakale, from Bodinga/Dange-Shuni/Tureta Federal Constituency in Sokoto State (PDP-Sokoto), said the matter has been slated for debate on Thursday, March 12.

Spokesperson for Hisbah in Kano State , (the state’s Sharia enforcer), Lawan Ibrahim Fagge, told The Nation by phone that 70 percent of the Almajiri who were apprehended on the streets by the Anti-bara unit of Hisbah over the last five months have been sent back to their states of origin including Katsina, Zamfara, Kebbi, Borno and Yobe.

Some of the young beggars are from Kano, Adamawa and neighboring countries of Chad and Niger Republic.

He said that following government’s ban on street begging some parents have voluntarily withdrawn their children from the streets.

Fagge said: “Those arrested children from Kano were classified. Those who can read and write the Holy Qur’an were identified while we await further directives from the governor.”