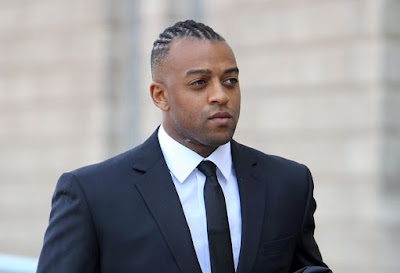 A woman who claims she was r-ped by JLS star Oritse Williams could be seen sitting on his lap and kissing a female pal as they drank shots in a nightclub, a court heard.

The court saw the pop star was filmed on CCTV slapping the 20-year-old fan’s bottom as they danced together in a VIP area hours before she was allegedly attacked.

The 32-year-old singer is accused of r-ping the woman after buying her alcohol and inviting her back to his hotel room in the early hours of December 2, 2016.

Williams has gone on trial at Wolverhampton Crown Court alongside his tour manager Jamien Nagadhana, 32 – who is also standing trial for s-xual assault.

Today (Wednesday) the jury were shown CCTV footage taken from inside Gorgeous nightclub, in Wolverhampton, where William’s had just performed a solo gig.

It showed the alleged victim and her friends clinking glasses as they drank shots with the singer and danced together.
At one point Williams tries to join in as the complainant is kissing her friend before the pop star slaps her on the bottom.

The woman and her friend then leave the nightclub in a taxi back to the city’s Ramada Hotel, where the alleged attack took place.

Williams, who was on The X Factor in 2008, is accused of r-ping the woman after she went back to his hotel room to fetch her phone.