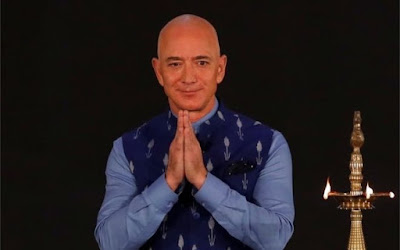 The last time Amazon boss Jeff Bezos was here, he wore a long Indian coat, climbed into a gaudily decorated truck, posed for pictures and promised to invest a couple of billion dollars. He also gave dozens of media interviews. “Your hear all the time that there are so many obstacles in doing business in India, but that’s not our experience,” he told a newspaper.

Five years on, the world’s richest man has arrived on a two-day visit to a much less enthusiastic reception.

A union of small traders who claim to represent tens of millions of brick-and-mortar businesses have planned protests in 300 cities against Mr Bezos, accusing his firm of predatory pricing. They complain that the online giant’s now six-year-old retail operation in the country is hurting them badly. Praveen Khandelwal of the Confederation of All India Traders, which is organising the protests, says Amazon’s “sinister game and evil designs” have “already destroyed the business of tens of thousands of small traders” in India.

If this was not enough, hours before Mr Bezos’s arrival, India’s anti-trust regulator opened a formal investigation into the business practices of Amazon and its Indian competitor Flipkart, an Indian e-retailer, mostly owned by Walmart.

The regulator says it is looking into allegations of predatory pricing, the exclusive launch of mobile phones, deep discounting and preferential treatment of selected sellers by the online giants, among other things.