Ighalo has proved me wrong –Berbatov 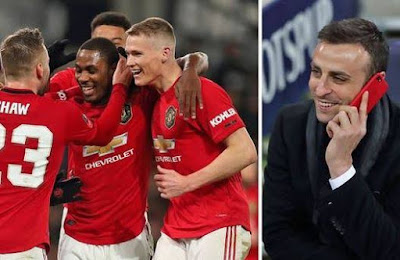 The 30-year-old was a divisive figure within the football community, as some suggested his arrival was an act of desperation on the path of United while, others believed his signing might have a Cantona effect at the end of the day.

Berbatov, was part of those skeptics, unconvinced about the Shanghai Shenhua striker, but, after his recent goal-scoring exploits, the Bulgarian looks quite happy to indict himself.

“I’m really happy to see that Odion Ighalo is settling in well and he deserves it with the way he is playing, how he links the plays and the goals he is scoring,” he told Betfair.

“All the team are happy when he scores which shows he is fully integrated, and I like the way he looks for the ball and bullies the defenders.

“I’ll be honest, I didn’t know too much about him before he joined, obviously I knew about his record in the Premier League, but I questioned if he was the right man and if he would get into the team, but so far he is doing well and proving me wrong.

“When you need to play more direct in a game you need a presence in the box, a guy who knows how to get onto the end of a ball, bully the defenders and win the ball.

“Ighalo can do that, but he can also play, is technically good as well, he can keep the ball and give it to his teammates and get into the box, that’s why I like him.

“He doesn’t just stay in the box and try to head the ball. He is linking really well with others and that shows in the team’s performance when he is involved.”