How bandits killed, maimed in 5 Kaduna villages for 4 hours — Witness 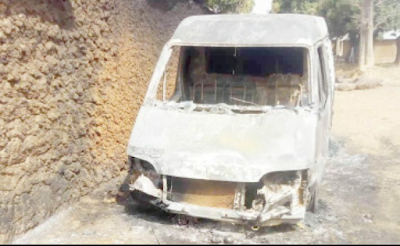 They came on motorcycles, in the quiet breeze of the early morning when many had left the comfort of their beds to congregate for the Subhi (early morning) prayer. It was 5:30am and the sounds of the assailants’ gunshots created panic; there was confusion and many ran in opposite directions, not certain where the bandits were coming from.

They had targeted and descended first, on Marina village in Kerawa district of Igabi Local Government Area of Kaduna State. Without mercy, they shot at men, women, children and the elderly.

“Those of us who used local charm and were impervious to their bullets paid a different price,” said a member of the vigilante group who escaped the attack.

“They ran over some of our men with their motorcycles. Because their bullets failed, their machetes were used to cut, slice and hack our people down and others were set ablaze,” he narrated.

After almost four hours of massacre that extended to four additional villages, our correspondents learnt that the bandits had only retreated when air and ground reinforcements from security agencies began their onslaught on them. By noon, the dozens of bandits that ambushed the five neighbouring communities of Igabi and Giwa local government areas of the state had left a trail of bloodbath, ashes of the people they burnt and empty shells of vehicles and homes they ransacked and set ablaze.

Marina village recorded 13 casualties, Kerewa village recorded 23 while 15 others were from Zariyawa, Rago and Unguwan Musa. Ibrahim Aliyu, a member of the vigilante at Marina village said the bandits had hit Marina first and on noticing the smoke emanating from the village, youths from neighbouring Kerawa had rushed to render assistance but were equally ambushed by the bandits.

“They burnt six vehicles in Marina village, cars and motorcycles were burnt in Kerawa as well as hundreds of bags of grains were set ablaze. They looted our communities and took away some of the motorcycles,” he said.

In remote communities where vehicular accessibility is difficult and GSM network, almost impossible, it took hours for help to reach the people of the affected villages. However, Governor Nasiru El-Rufai had said the casualty figures would have been far more devastating if not for the intervention of security agents.

As at the last count, the ward Councillor of Kerawa, Dayyabu Kerawa, said 51 people had been killed, about 5000 bags of grains destroyed. He appealed to the State Emergency Management Agency (SEMA) to assist the people who are now taking refuge at Karaukarau and Iyatawa villages of Giwa LGA.

Daily Trust Saturday gathered that about three victims are currently receiving treatment at Kauran Wali clinic and one other at ABU Teaching hospital, Shika in Zaria Local Government Area while eight others are at the Iyatawa Hospital in Giwa LGA.

Hajiya Rabi Bakali had survived an attack on her home town of Bakali in Giwa Local Government Area of the state on February 11, 2020. The attack however claimed seven of her grandchildren, her son and his two wives who were burnt in a house barricaded by the bandits.

The 50-year-old had after the attack relocated to live with her eldest son, Sani Bakali, at Iyatawa village in the same LGA and only last week, visited Kerawa for a wedding when she found herself caught up in another loop of banditry attack that almost claimed her life.

“After the early morning prayer, we heard some people saying Innalillahi wa Innailaihi rajiun (From Allah we come and to Him we shall return). They had noticed smoke coming from Marina village which is less than two kilometres from Kerawa village.” She said soon after, the vigilante groups in Kerawa began mobilising young men to assemble and head to Marina with the hope of assisting the people. However, Hajiya Rabi told daily trust correspondent that not long after youths from Kerawa stormed out; a few of them ran back screaming for everyone to get out as the assailants were on their heels.

Rabi said: “I couldn’t believe it was happening to me again for the second time. We ran out of our home because from experience, we knew our chances of survival were better running out. If you stay in to hide, they will ransack the house and set it ablaze. They chased us on their motorcycles and I fell several times but I got up and kept running.”