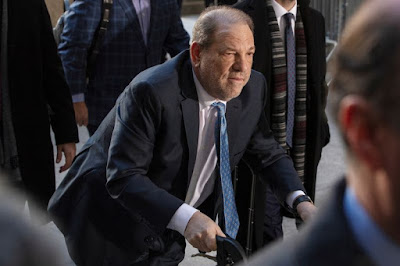 Harvey Weinstein has been released from hospital and he is on his way to notorious prison Rikers Island.

The shamed movie mogul had been accused of faking his illness in a bid to avoid being sent to the infamous New York jail.

After being found guilty of r.a.p.e and sexual assault on Monday, the former movie producer was rushed to hospital with chest pains.

Publicist Juda Engelmayer told CNN yhe Department of Corrections is “moving him as we speak to the Rikers infirmary unit.”

After he was convicted the 67-year-old wailed: “I’m innocent. How can this happen in America?”

The New York City Supreme Court judge ordered that Weinstein be remanded in custody on Rikers Island until his sentencing on March 11.

It’s said that the convicted s.e.x offender is facing up to 29 years behind bars.

But after the hearing ended, he was pictured leaving the New York courtroom in an ambulance.

It was said to be a “precautionary measure”.

He was taken from the courthouse to Bellevue Hospital, where he had remained until today.

But he was accused of faking his illness, with a source telling The Sun that Weinstein does suffer from diabetes but was “faking it a little bit”.

It’s said that officials at the New York City Department of Corrections have increasing concerns over the rapist’s safety at Rikers Island.

The jail is infamously violent and has housed some of the most high-profile and dangerous prisoners ever.

TMZ reported that a plan was being put in place to put Weinstein under round-the-clock surveillance.

It comes amid fears that Weinstein could take his own life while he’s behind bars, like convicted s.e.x offender Jeffrey Epstein did last year.

Weinstein’s lawyers have asked for him to be placed in Rikers’ North Infirmary Command, which is used for Rikers inmates who are in poor health.

Either way, Weinstein will become known as inmate No. 3102000153 while he awaits his sentencing in the hellish prison.