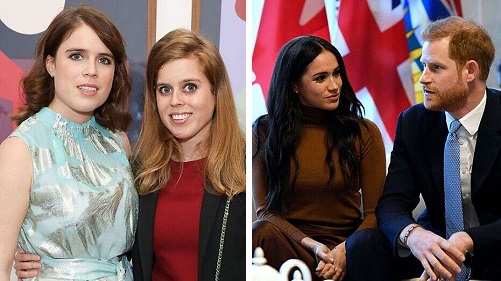 Prince Harry and Meghan Markle’s roles in the Royal Family could be taken up by Princesses Beatrice and Eugenie, it has been claimed.

Prince Andrew’s daughters will be “brought forward” once the Duke and Duchess of Sussex officially step down in the spring, according to biographer Robert Lacey.

The historical consultant for Netflix series The Crown has said it’s “quite clear” the princesses will be ushered into the hole left by the Sussexes, but only “if they’re willing”, reports the Sun.

This comes in stark contrast to Prince Charles’ previous assertions, prior to Harry and Meghan’s announcement, that The Firm would be stripped back to a central core in the future.

With William and Kate’s three children still so young, Mr Lacey says adding Andrew’s daughters would be “greatly welcomed” in the interim 15 years or so.

“It’s ironic that Harry mentioned his cousins as models of how he wants to be,” he added.