Fresh concerns as more Nigerians use paracetamol to cook meat 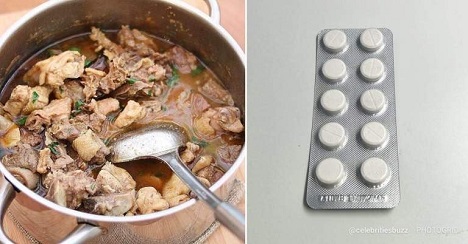 Fresh concerns have been raised by health experts on Nigerians’ increasing use of paracetamol, a drug meant for pain relief, to cook meat for household and commercial consumption.

Leadership investigation revealed that hundreds of households, restaurants and bars, especially those owned by small operators, have continued to use paracetamol to tenderise meat to save cost as the prices of firewood, kerosene and cooking gas hit the rooftop.

Some food vendors admitted that they use the drug to cook meat because it helps them to spend less on kerosene, cooking gas, firewood or charcoal.

According to them, no matter the quantity, paracetamol softens meat within a few minutes of being placed on fire. They added that the drug is also accessible and affordable as one sachet of 12 tablets is sold for only N50.

This claim was buttressed by a bar attendant in Mararaba, Nasarawa State, who told the newspaper that when some tablets of paracetamol are used to cook cow leg and skin popularly known as “ponmo”, they get softened and ready for eating within a few minutes.

He said: ”It is really helpful because now we don‘t spend so much money on charcoal since our pepper soup (local delicacy) doesn‘t take long to cook anymore.”

But medical experts have warned that paracetamol, when cooked, loses its pain-killer property and becomes highly acidic and dangerous for human consumption.

The president, Pharmaceutical Society of Nigeria (PSN), Mazi Sam Ohuabunwa, described the use of paracetamol for cooking as a “wicked act”. The renowned pharmacist said that paracetamol is paraspecific acid of aminophenol and also a chemical substance.

He said that every such substance has both chemical and physical effects, adding that they can help in softening tender materials.

Ohuabunwa expressed worry that the consumers of meat cooked with the drug would only end up consuming something they don‘t need or deserve thereby creating problems for them.

He said: “I don‘t know why people should involve themselves in this kind of wicked act against themselves and consumers of their products.Paracetamol is a medicine and it is paraspecific acid of aminophenol and it is a chemical.

“Every chemical can have some chemical, physical effects and then can help in softening, tender materials but the critical thing is that you are therefore giving people along with the meat, something they don‘t deserve and what they are not in need of, and you are loading up their body with the chemical they don’t need. You are creating problem for them because you are overloading the liver because the liver has to metabolise the chemical and take it out through the kidney,” he said.

This, Ohuabunwa said could lead to liver necrosis because the organ is the chemical factory. He, therefore, urged Nigerians to desist from the act.
He also called for adequate enlightenment because it is assumed that those who indulge in the practice do not understand what they are doing.

He said that anyone found engaging in the illicit act should face the law, lamenting that “it is an act of poisoning people.“

The chairman of the Federal Capital Territory (FCT) chapter of the Nigerian Medical Association (NMA), Dr. Ekpe Phillips, warned that paracetamol is not a drug that should be abused. He said that the primary area where it is being metabolised is the liver and could, therefore, expose consumers to liver problems.