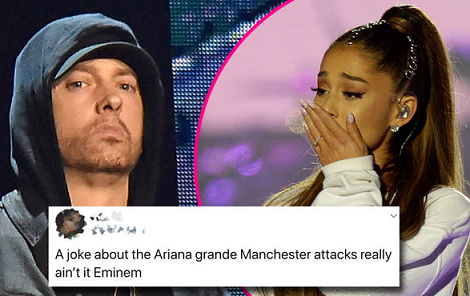 Eminem has been called “disgusting” and “pathetic” after rapping about the Manchester Arena bomb attack, which killed 22 people in 2017.

The lyric comes in a new song, Unaccommodating, in which the star boasts about his impact on hip-hop.

At one point, he says: “I’m contemplating yelling ‘bombs away’ on the game / Like I’m outside of an Ariana Grande concert waiting.”

Figen Murray, whose son died in the attack, called the song “pointless”.

“Feels like he is piggybacking on the fame of Ariana Grande and Justin Bieber and says distasteful things about other celebrities,” she wrote on Twitter.

“Not clever. Totally pointless. And before all Eminem fans pounce on me, I am not interested and will not engage.”

Murray’s 29-year-old son, Martyn Hett, was one of the 22 people who died when Salman Abedi blew himself up at the end of Ariana Grande’s concert in May 2017.

She has since campaigned for the introduction of Martyn’s Law, which would require venues to introduce more stringent security checks.

Hett’s former partner Russell Hayward also voiced his disapproval of Eminem’s lyrics, writing: “It’s disappointing but not surprising that #Eminem would use controversial lyrics about the Manchester bomb, dragging the victims’ families & Ariana back into a very dark time.

“Not sure how popular he is these days but I hope any success he gets from the back of this is worth it.”

His comments were echoed by Grande’s fans, who described Unaccommodating as “a pathetic attempt to get attention”.

One fan tweeted the rapper saying: “You’re so disgusting I hope u know that. What u said was very uncalled for and so hurtful to so many people.”