Home / Featured / El-Rufai Is An Unpopular Governor, He Hasn’t Achieved Anything – Shehu Sani

El-Rufai Is An Unpopular Governor, He Hasn’t Achieved Anything – Shehu Sani 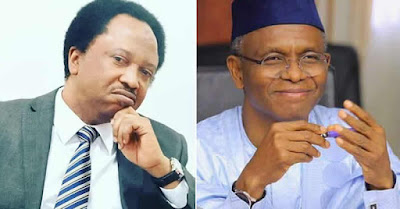 The Senator representing Kaduna Central at the National Assembly, Shehu Sani, has described the state Governor, Nasir el-Rufai, as “unpopular.”

Sani, who is contesting for the Senate on the People’s Redemption Party platform, also said the governor had not achieved anything since 2015.

The senator had dumped the All Progressives Congress for the PRP three days after he was denied the ticket to contest for the Senate on the APC platform.

His rift with the state governor was believed to have cost him the ticket.

Speaking on Nigeria 2019, an Arise TV programme on Thursday, Sani said the PRP was a major threat to the APC in Kaduna State, saying, “This is why every morning and evening, they destroy our billboards and tear our posters. They are persecuting our members. If we were inconsequential, they would have ignored us.”
Sani alleged that, the fact that “el-Rufai had a hand” in denying him the APC ticket didn’t mean anything.

He said, “The question is, can he win? The fact is that he is one of the most unpopular governors in the history of Kaduna State.

“The President (Muhammadu Buhari) has been to the state for many times, but how many times have you seen him inaugurating a project in the state?

“The first time the President went there, he was given a honorary degree from a university that had not started a PhD programme; the second time he was in the state was to inaugurate Olam, a company from Singapore.

“The third time was to inaugurate a project by the Ministry of Transport. So, he (el-Rufai) has not done anything and we are going to remove him out of power. That is a fact.”

The lawmaker explained that he and el-Rufai had always been at daggers drawn because of their differences both politically and ideologically.

He said, “Politically, he is a product of the establishment. Out of what they say is the 16-year tragedy of the Peoples Democratic Party, he spent 14 or 15 years there as a member, from the regime of (former President Olusegun) Obasanjo, where he held different positions. So, he was part of the system before he joined the APC.

“All my life, I have been a freedom fighter, that is, a human rights activist. Most of the years under military rule, I spent my time in prison. From this angle, you can see where we differ.”

“For a governor of a state who came into office with a Muslim-Christian ticket now going for a second term and saying some people don’t matter, I don’t want to be associated with that kind of person, because all I know is that, with all his arrogance, haughtiness and egoism as a governor, power is ephemeral.

“There is a time he will be out of office and he will account for whatever he has done,” Sani stated.