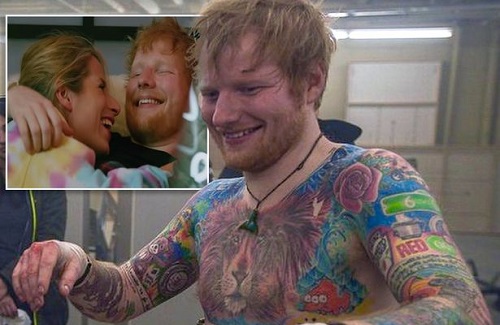 Ed Sheehan is planning to have five children with his wife Cherry Seaborn – and has already mapped out space on his body for tattoos of their palm prints.

The 29-year-old Shape Of You singer tied-the-knot with childhood sweetheart Cherry in 2018 and has now got his sights set on creating a huge family.

Chart topping star Ed is already well known for his wild collection of tattoos which include a dramatic lion face across his chest and comic book style wording on his arms.

But now he has come up with a design of five circles which he has already had inked onto his back – with the plan being that prints of his children’s palms will fill the holes once they are born.

“Ed comes from a large Catholic family and he wants to have a house full of kids,” a close friend blabbed to the Mail On Sunday.

“He has had five intertwined circles put on his back that look a bit like the Olympic rings. He wants to put a tattoo of a palm print into each circle,” the source claimed.

Ed has faced ridicule for some of his bizarre tattoo choices in the past – however most appear to have significant meaning behind them.
d and Cherry began dating in 2015 – before announcing their engagement in 2018.

The happy couple swapped vows in front of friends, family in January 2019 – while Ed’s manager previously suggested the star has a strong desire to start a family.

“He won’t sit still for long. He’s not the holiday sort. But things may change – he could have a young family relatively soon,” manager Stuart Camp told Music Week in 2018.