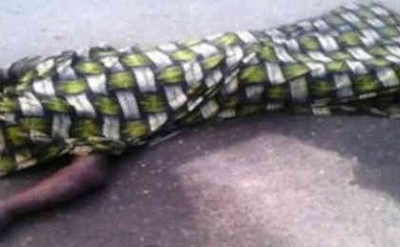 The lifeless body of a nursing mother, one Mama Ebuka, was found inside a gutter in Abakaliki, the Ebonyi State capital, on Monday.

It was gathered that the woman, until her death, was nursing a two-week-old girl, whom she gave birth to on January 1, 2020.

Mama Ebuka’s partially burnt body was found inside a gutter around the Enugu North Transport Company park at the VANCO area of Abakaliki.

Investigation revealed that the woman, who was a Catholic, left home for Mass on Sunday, but did not return.

The incident, it was learnt, led her husband to report his wife’s disappearance at the state police headquarters.

It was gathered that she told family members of her intention to embark on a spiritual exercise at the chapel located inside the St. Theresa’s Catholic Church, Abakaliki.

Punch correspondent, who visited her residence at No. 14 Awolowo Street, Abakaliki, found the family apartment under lock and key.

A source, who is close to the family, told Southern City News on condition of anonymity that the woman’s family members took her corpse to her village somewhere in the Izzi Local Government Area of the state for burial on Tuesday.

According to the source, the cause of the woman’s death and those behind it had yet to be ascertained.

The source stated, “This woman, simply called Mama Ebuka, prepared on Sunday morning and said she was going for morning Mass at the chapel. She was a Catholic. There is a chapel at the St. Theresa’s Church. She didn’t come back again. Nobody saw her again until Monday morning, when her corpse was found.

“She just put to bed on January 1, 2020. She didn’t go out with the baby. She had four children. The family members have travelled to the village to bury her.”

She told Southern City News that the matter was being investigated to unravel the circumstances surrounding the woman’s death, adding that it would do members of the public some good if they formed the habit of sharing information with the police.

Describing the woman’s death as unfortunate, Odah added, “We are aware of the matter and the police are investigating it.