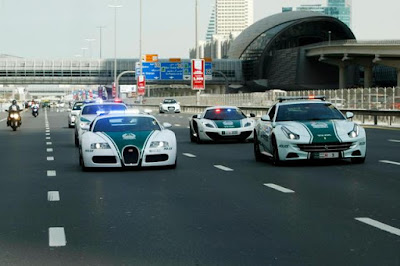 Police in Dubai have unveiled the latest supercar to join their crime-fighting fleet – a Maserati GranTurismo.

The £82,000 high-speed car will serve the force in the oil-rich city alongside a Lamborghini Aventador, a Ferrari FF, and Mercedes-Benz SLS AMG.

Dubai Police have perhaps the most expensive selection of vehicles worldwide for a police force.

In November they said they were training in the use of flying motorbikes which could be deployed to the streets as soon as 2020 and travel up to 60mph.

The chief of Dubai Police, Abdullah Khalifa Al Marri, has proudly showed off the latest addition to the police force.

The GranTurismo has a 4.7-litre, 460-hp V8 engine and was bought for police from Al Tayer Motors, the official dealer of Maserati in the United Arab Emirates.

With the addition of GranTurismo, the Dubai Police now have a total of 15 sports cars in its fleet, said Lt. Col Dr Mubarak Saeed Benawas Al Kutbi, director of the tourist police department.

Lt. Col Al Kutbi said the sports coupe would be stationed in different tourist spots and landmark areas across the emirate.

Dubai Police unveiled their first supercar back in 2013 – the Lamborghini Aventador and it was soon pictured in the livery of the force. 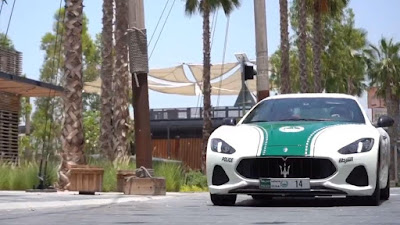