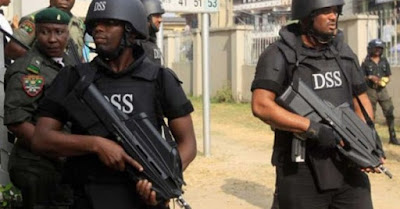 The Department of State Security Services has docked Kabiru Muhammad, a suspected ‘mastermind’ behind the viral news of President Muhammadu Buhari’s second wife wedding before a Kano Magistrate court.

DSS alleged that Kabiru purported the fake news of a wedding between the President and Minister of Humanitarian Affairs, Sadiya Faruk. Kabiru created a frenzy in the country by spreading a fake wedding ‘Fatiha’ card.

The accused is charged on a two-count charge of Defamation and Injurious falsehood contrary to section 392 and 393 of the Kano Panel Code. The charges will attract a maximum of three years imprisonment without fines if the suspect is found guilty of the offence.

According to eyewitnesses, Kabiru arrived at the court premises wearing a long gown amidst tight security, looking disturbed.