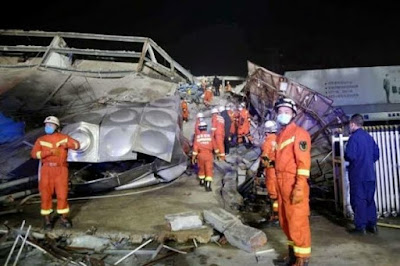 At least six people were killed in the collapse of a hotel used as a coronavirus quarantine facility in eastern China, the Ministry of Emergency Management said on Sunday.

Rescuers retrieved 43 people from the rubble, of whom 37 are still alive, the ministry said on its firefighting department’s social media account.

The coastal city of Quanzhou has recorded 47 cases of the COVID-19 infection and the hotel had been repurposed to house people who had been in recent contact with confirmed patients.

Video posted by the firefighting department showed rescuers putting a surgical mask on children as they were pulled from the rubble of the six-storey Xinjia hotel, including a twelve-year-old boy and another much younger child.

Rescuers were also shown spraying disinfectant on each other as part of “strict decontamination” between shifts.

Footage published by local media, purportedly from security cameras across the street, showed the hotel collapsing in seconds.

The building’s first floor has been undergoing renovation since before the Lunar New Year, and construction workers called the hotel’s owner minutes before the collapse to report a deformed pillar, the ministry said.

The building’s owner has been summoned by police, and local authorities are still determining whether it was the renovation or an original structural issue that caused the collapse, according to the ministry.