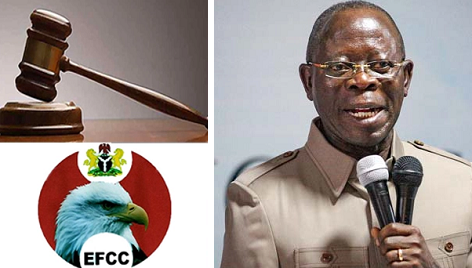 The Federal High Court in Abuja has struck out a lawsuit seeking for an order of court for the Economic and Financial Crimes Commission (EFCC), to investigate the National Chairman of the All Progressives Congress (APC), Adams Oshiomhole.

Justice Anwili Chikere struck out the lawsuit on Monday, while ruling on the preliminary objection filed by Oshiomhole.

The plaintiff, an Edo State based cleric, had dragged the EFCC and Oshiomhole to court, asking it to order the Commission to investigate different petitions that contained allegations of financial recklessness against Oshiomhole.

But in his preliminary objection, Oshiomhole had asked the court to dismiss the suit, noting that the plaintiff lacked the locus standi (legal right) to institute the action.

While the judge agreed with the counsel to the plaintiff, Mrs Uju Chukwura, that Section 6 of the EFCC Act mandates the Commission to investigate and prosecute any allegation of financial anomalies, she, however, noted that in Oshiomole’s case, the suit is statute barred.

According to her, the plantiff failed to seek judicial review within the stipulated three months window and only approached the court 18 months later.