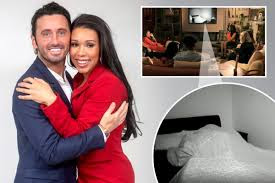 Real-life couples will have s-x on TV in a bizarre new show – before getting advice on their bedroom action from a relationship expert.

Brave pairs will invite cameras into their homes to film them doing the deed in Channel 4’s S-x Tape.

Afterwards they will sit down with other couples and a s-xpert to receive tips on how they can improve their skills under the sheets.

While it might sound terrifying to most, one couple said the experiment helped save their relationship.
Club owner Brian Matthews, 35, and his girlfriend of three-years Victoria Obahor, 28, were worried that their s-x life had become too boring as their feelings for each other deepened.

But they ran into problems in their relationship as former Jack-the-lad Brian was struggling with being tied down, and admitted to having an affair.

Victoria felt like a “bored housewife” and applied to the show to spice things up.

But she had a shock when the cameras came into their bedroom, and said the s-x they had while being filmed was the “worst of my life”.

When they watched the footage back they were mortified; Brian didn’t like the way he treated Victoria and she felt like she should have ended things a long time ago.

Relationship expert Anjula Mutanda told them they both looked bored in bed and they agreed to get a bit more experimental.

She urged them to reconnect and they spoke frankly about what they wanted from each other.

And despite their problems, Victoria said appearing on the show has done the trick.

Victoria told The Sun : “It has made me insatiable again! I have started to go back to the old ways in the bedroom. It has helped me.”