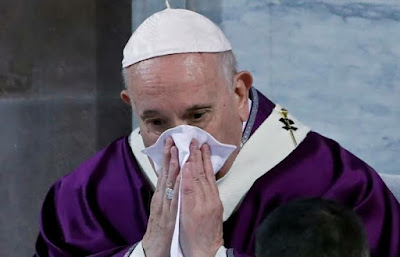 The 83-year-old pontiff broke with centuries of tradition by enlisting the help of technology to keep crowds from descending on Saint Peter’s Square for the traditional Angelus Prayer.

“The prayer will be broadcast via livestream by Vatican News and on screens in Saint Peter’s Square,” the Vatican said in a statement.

It had originally promised to review the Argentine-born pope’s schedule “to avoid the dissemination” of the new COVID-19 disease.

The Vatican appears to believe that the pope’s absence from his traditional spot at the window will keep the crowds on the vast square down and the threat of contagion low.

The pope himself has been out of action for more than a week with a cold.

The Vatican is in the process of unrolling unprecedented health precautions designed to keep the city state’s 450 mostly elderly residents safe.

It recorded its first COVID-19 infection on Thursday and was awaiting the results of a test on another person who appeared at a Vatican-organised event last month.

The Vatican said all those present were being notified about the test as a precaution.

Share
Previous Kano court gives woman N50,000 option of fine after sentencing her to 3 years in jail for killing son
Next Salah breaks records as Liverpool return to winning ways