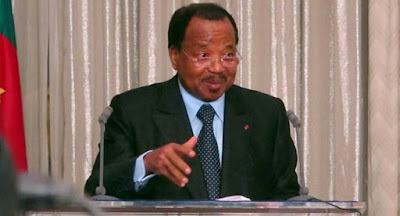 Cameroon’s aged president is coming under fire for his absence from the national stage as the central African country faces a burgeoning coronavirus crisis.

A month after the first case of COVID-19 was recorded, 87-year-old Paul Biya has yet to address the nation — a silence that for supporters is a sign of gravitas but for critics one of failure.

According to official figures posted early Monday, Cameroon has 658 cases of the virus, with nine deaths, making it the second most-affected country after South Africa in sub-Saharan Africa.

Cameroon is already waging two violent conflicts, one against Boko Haram jihadists in the north, the other against English-speaking separatists in the west.
The fighters in the new front are doctors and nurses who are woefully lacking in masks and breathing equipment.

In his 37 years in power, Cameroonians have become accustomed to Biya’s long absences, mainly because of poor health, but his silence over the pandemic is raising sharp questions.

He posed for the cameras after talks with the US ambassador on March 11, but did not speak to the press.

Six days later Biya urged Cameroonians on Facebook to “respect” measures taken to combat the virus, but since then there has not been so much as a whisper from a leader who has overseen many crises since he took power in 1982.