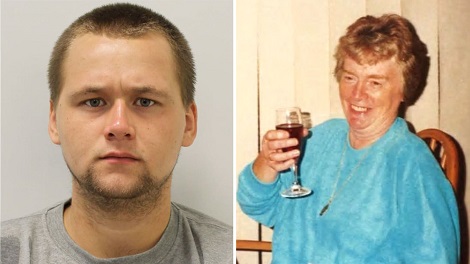 A burglar has been jailed for life for sexually assaulting and murdering an 89-year-old widow after breaking into her home.

Reece Dempster, 23, admitted the sickening attack on Dorothy Woolmer part-way through his trial at the Old Bailey yesterday. He has been handed a life term with a minimum term of 34 years.

Dempster looked to the floor and nodded as he was sentenced for the brutal murder in Tottenham, north London, in August last year.

The court heard how Dempster forced open the back door of Mrs Woolmer’s home in a hunt for money to feed his drug habit.

A month earlier, he had completed gardening work for the pensioner, who was less than 5ft tall, and knew she was vulnerable following the death of her husband.

After breaking in, he found Mrs Woolmer in bed and subjected the elderly woman to a seven-hour sexual ordeal, during which she suffered 10 or more blows to the head.

A pathology report found she was still alive during the sexual assault.

The thug, who said he had been drinking gin and smoking crack beforehand, battered Mrs Woolmer – who had bone condition osteoporosis – until she died.

Her lifeless body was found bloodied and semi-naked, wrapped in a bed sheet, by her sister and a close friend.

The pair grew concerned when the ‘independent and feisty’ pensioner failed to answer the door or respond to phone calls.