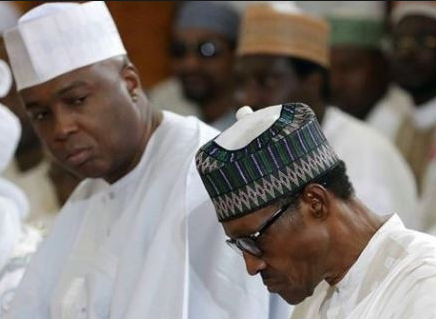 President Muhammadu Buhari has no integrity and his government is corrupt, the Senate President, Bukola Saraki, has said.

Speaking in a Channels TV interview Wednesday, in his capacity as the director general of the Atiku Campaign Council, Mr Saraki said the president was tolerating corrupt associates and that has cost him his integrity.

“There is no doubt that there are corrupt people around the system. If the President is fighting corruption truly, I am baffled how a member of his government who was found wanting, up till today, no charge, no prosecution,” the senate president said.

“To me, once you can do that, you lose integrity, the moral high ground to say you are fighting corruption. You must show that nobody is above the law, you must show that no matter how close anybody is to you that you’ll take action and that’s not happening,” he said.

Responding to a question on whether the president himself is corrupt, Mr Saraki said it is the administration that is corrupt.

“Based on the action I’ve seen, yes his government is corrupt if you are not taking action when people are corrupt. Why condoning it?

Mr Saraki, who parted ways with the All Progressives Congress in July 2018, cautioned opposition supporters against blaming the PDP for the country’s problems.

Share
Previous Oscars To Have NO Host For The Ist Time In 30 Years
Next New Photo Of Toolz, Husband & Son